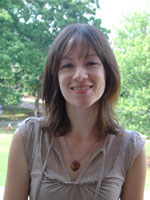 Danielle Bouchard earned her Ph.D. in Feminist Studies from the University of Minnesota in 2006. Her research is located at the intersections of feminist theory, postcolonial philosophy, critical university studies, histories of US militarism and empire, and film studies and visual culture. Her first book, A Community of Disagreement: Feminism in the University, uses the philosophical concept of disagreement to question the common ways in which feminist scholars have narrated the history and place of feminism in the US university, particularly as that narration has often supported a suspicion toward and management of racial difference. She has also published in journals such as Genders, Culture, Theory and Critique, and Feminist Formations. Her current in-development monograph project tracks the afterlife of western colonial forms of visual knowledge, following the concept of ruination through its capricious and various manifestations—as radical obliteration, as absenting/disappearance, and as the spectacle of torture and killing—in order to critique the imagistic archive of destruction that is central to many humanitarian projects and discourses.