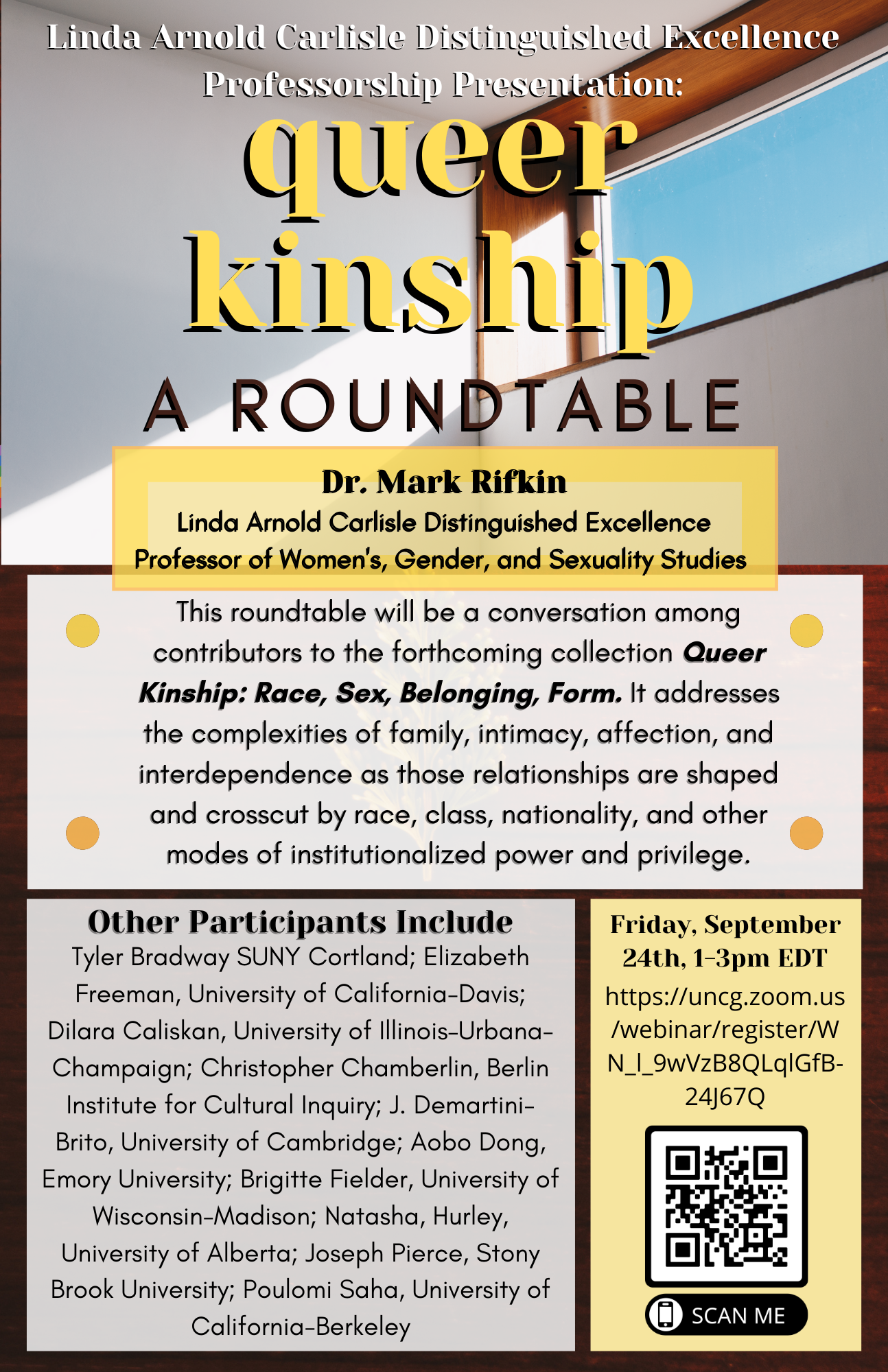 On Friday, September 24th, the Linda Arnold Carlisle Distinguished Excellence Professor Mark Rifkin hosted “Queer Kinship: A Roundtable.” The event was a conversation among contributors to the collection Queer Kinship: Race, Sex, Belonging, Form: Tyler Bradway, Elizabeth Freeman, Dilara Caliskan, Christopher Chamberlin, J. Demartini-Brito, Aobo Dong, Brigitte Fielder, Natasha Hurley, Joseph Pierce, and Poulomi Saha. The authors reflected on kinship theory and its relationship to queer theory. Each brought unique perspectives in discussing the complexities of family, intimacy, affection, and interdependence as they reflected on how these relationships are shaped and crosscut by race, class, nationality, and other modes of institutionalized power and privilege.

The seeds of the volume took shape in 2005 when Freeman began writing on kinship theory and its relationship to queer theory. She thought about the difference in how affinity was felt and practiced through time. Freeman engaged with Judith Butler and anthropological literature to find a kind of queer performance of kinship that didn’t tend to follow conventional lines of intimacy. That article gained widespread attention and is still one of her most viewed articles online. A decade later,  Bradway contacted her and asked if she would like to co-edit an anthology on queer kinship. They put out a call for essays that would speak to the relationships between queer theory, colonial violence, race, and indigeneity.

The collection of essays they developed shows how queer aesthetics form relationships that involve kinship but are distinct from the nuclear family. The essays explore this theme in three sections: queering lineages; kinship, state, and empire; and kinship and the negative.

The roundtable gave an opportunity for the authors to speak briefly about their writings before the collection comes out sometime next year. Caliskan talked about how their piece on the mothership bond formed among transwomen who do sex work in Istanbul, Turkey. Caliskan stated that they thought about trans-motherhood and trans-daughterhood through care, love, companionship, violence, cruelty, and inheritance and explored how these topics related to queer kinship. Caliskan also traced memories of kinship and the meaning of belonging. Demartini-Brito spoke in their writing about Brazil and its future with queer belonging in the context of the violence on queer bodies. The future of Brazil is seen only for white heteronormative families by Brazilian leadership. “Gay cure” medical practices and persecution of Afro-Indigenous populations are frequently called upon in Brazil as the state produces a kind of kinship that excuses itself from the material relations of belonging. The Brazilian state does that work through a celebration of diversity that erases difference. Fielder spoke about Alice Dunbar Nelson’s unpublished short story “The Child is Father to the Man.” The story plays on the queerly circular formation of kinship, in which childhood begets manhood which then begets childhood. Fielder argues that Nelson’s story engages racialized embodiment as itself a circular dynamic rather than a form of lineal inheritance.

These are just a  few of the rich themes that were explored in this stimulating session. We look forward to the publication of Queer Kinship in 2022.