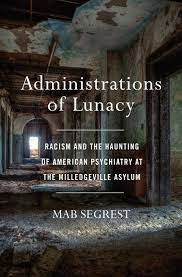 On Thursday February 18th, Women’s, Gender, and Sexuality Studies at UNCG hosted Dr. Mab Segrest for a provocative discussion on her book, Administrations of Lunacy: Racism and the Haunting of American Psychiatry at the Milledgeville Asylum (2020). The book explores the history of the American South told through the Asylum, pondering the ways in which psychiatry is rooted in racist psuedo-science that disadvantaged people across social classes.The threat of the Milledgeville Asylum, located in Milledgeville, Georgia, haunted the biographies and literature of the people alive while it operated, constantly reminding them of the precarious nature of their freedom.

According to the United States National Research Council in 1997, things exist in a time and thus have a history, but they also exist in a space and have a geography as well. There were large populations of freed African Americans in the Milledgeville Asylum and often the phrase “no history” was used to describe what the asylum staff knew of their past trauma. Mab Segrest was appalled, wondering how they could claim that these patients had no history in the Reconstruction era South, in the wake of the Civil War and Emancipation?

Mapping the lynchings in Georgia by country along with the entrance of African Americans into the Asylum, Mab Segrest found that the trauma of racial violence was completely erased by the Asylum, affectively turning the asylum into a crypt for the horrors of slavery. Today, 90% of all psychiatric beds are in jails and prisons, continuing the penal legacy of psychiatry that negatively affects and disappears African Americans disproportionately.

Segrest maps the history of the asylum, paying attention to the voices that have been most marginalized and buried in the accounts of Milledgeville, those of the patients. Although there is not much to find as far as direct accounts, there are lives to be uncovered in the patient files. There are moments of resilience within the minute defiances of patients, like how Black female patients fought back against handlers and others argued with doctors about their diagnoses, that demonstrate their need for justice and their awareness of their marginalization.

Ultimately, the asylum was a way of disappearing people that haunted Milledgeville and the surrounding area for years, and the ghastly racist history of psychiatry continues to haunt us. What Mab Segrest asks of us with Administrations of Lunacy is if we are willing to reconceptualize sanity as justice and think critically about the ways sanity can be saved when we pursue justice for all of us.