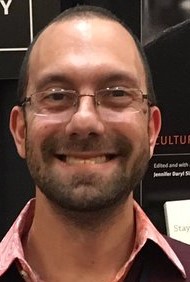 During the period of the professorship, Dr. Rifkin will be working on three book projects.  The Politics of Kinship: Race, Family, Governance seeks to rethink the concept of “kinship” in order to foreground the racializing work it does while also highlighting the ways it can point to suppressed forms of collective political life among racialized populations (Indigenous and otherwise).  The second project, Indigenous Abject, Indigenous Fabulous: Indigiqueer and Two-Spirit Worldmaking Beside Sovereignty, turns to contemporary Native queer, trans, and Two-Spirit authors in order to address the ways they theorize forms of Indigenous experience and modes of collectivity that cannot quite be captured through available political idioms of Native nationhood, such as “sovereignty.”  The final monograph is The Cambridge Introduction to Queer and Trans Studies, which will focus on the complexities of how “queer” and “trans” have operated as scholarly concepts through which to gather a wide array of intellectual and political projects.

The Linda Arnold Carlisle Distinguished Excellence Professorship was established by the UNCG Friends of Women’s, Gender, and Sexuality Studies for the purpose of enhancing the academic and co-curricular programs of WGSS. The Carlisle Professorship rewards the most promising faculty research agendas while using that selected research focus to build energy throughout the WGSS Program and the campus community. The Professorship is awarded for a period of four academic years. The Carlisle Professor receives a $10,000 annual salary stipend plus $12,000 a year in research funds.

The next Carlisle Distinguished Excellence Professor will be selected in Spring 2021.

The University of North Carolina at Greensboro Women’s, Gender, and Sexuality Studies Program invites applications for a professorship in Women’s, Gender, and Sexuality Studies. The professorship will be awarded for a period of four academic years. Candidates must be full professors at UNCG when they take up the appointment. Candidates whose promotion to full professor is pending must supply their letter from the UNCG Board of Trustees confirming their promotion. Final appointment to the professorship for candidates undergoing promotion review is contingent upon promotion approval at all levels (i.e., the UNC Board of Governors).

Recommendation of a candidate for the professorship will be made by the Dean, in consultation with the Women’s, Gender, and Sexuality Studies Program, to the Provost, who with the Chancellor will recommend appointment by the University’s Board of Trustees.

The successful candidate will normally be selected from faculty members who have contributed to the Women’s, Gender, and Sexuality Studies Program. Candidates in all disciplines and departments are invited to apply.

Criteria to be used in recommending and appointing the candidate to the professorship include the following:

The professor is expected to engage both with the WGSS program and the broader community through activities such as symposia, programs, community-engaged scholarship or public exhibitions or performances. A public presentation by the professor must be an integral part of each year’s work (e.g., colloquium, lecture, presentation of essays or creative work in progress). The professor will also be asked, as funds are available, to invite annually to campus a nationally recognized speaker whose work relates to the professor’s scholarly or creative activity. This visiting scholar is expected to participate in the Women’s, Gender, and Sexuality Studies Program through lectures, seminars, performances or other similar activities.

The professor will receive a salary supplement of $10,000 annually, and research support of $12,000 per year will be made available to support the professor’s work. Candidates are asked to specify a two-year budget that has been approved by the appropriate department head or dean as part of the application process. At the end of two years a budget for the final two years will be required. The budget may include such items as release time, research assistance, books, equipment and supplies, and travel. Application forms are available below.

Dr. Green will use archives to probe the influences of the politics of respectability in the lives of early twentieth century Black women in order to expand our understanding of how they negotiated political, social, and economic constraints of the era, particularly in terms of gender politics and/or sexual identity.

Dr. Kilcup’s project, “Stronger, Truer, Bolder”: American Children’s Writing, Nature, and the Environment, will extend Fallen Forests’ investigation, examining particularly how nineteenth-century women writers and journal editors collaborated in projects that advanced children’s (and parents’) environmental literacy and ethical action, and how their work continues today. This volume forms the core of her Carlisle professor project, “Engendering Environmental Ethics,” which will highlight how women have contributed powerfully to projects of environmental literacy and advocacy for socially progressive causes that include interspecies equity and environmental justice for the poor, immigrants, and people of color.

Dr. Roskelly’s four-year project started with the title, “The Cultivating of Uncertainty: Pragmatisn, Feminism and Pacifism. “ Roskelly’s lecture in the fall of 2007 explored connections between Ida B Wells and Jane Addams, civil rights activist and social settlement director, showing how these two women worked together and wrote about methods to achieve social justice. The lecture became a cornerstone of Roskelly’s book on women, pragmatism, and feminism, Certain About Uncertainty: Feminist Rhetoric and the Hope for Peace. Her research on the interconnectedness of Wells’ and Addams’ work inspired Roskelly in planning a symposium with Bennett College that investigated the history of how women from Bennett and UNCG, formerly Woman’s College, worked together towards social justice. The Symposium, entitled Affectionate Interpretation: The Parallel Histories of Civic Engagement by Students at Bennett College and UNCG, was held at the Greensboro Central Public Library on December 5, 2008 and again at UNCG.

Dr. Smith’s research project was “Breastfeeding – – Critical feminist issue or regressive practice? Using Women’s Experiences to Link Feminist Theory to Breastfeeding Practice and Promotion.” Through the professorship funding, the first “Breastfeeding, Motherhood, and Feminism” symposium was held on the UNCG campus in 2005. It has continued to be an annual event led by Dr. Smith and grown to attract an international following. The symposium is held at UNC on alternate years.

Dr. White, the first Carlisle Professor, conducted research on the relationship between childhood sexual victimization and female juvenile delinquency. White’s research brought a new emphasis on gender to analysis of delinquency and included quantitative and qualitative data on delinquency and girl’s involvement with the juvenile justice system.