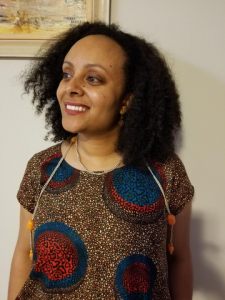 Every academic year, the Women’s, Gender, and Sexuality Studies program awards a faculty member with the Linda Arnold Carlisle Faculty Research Grant to support promising research or creative work related to the program. Dr. Hewan Girma, Assistant Professor and Director of Studies in the African American & African Diaspora Studies Department is this year’s recipient. Her project, “Ethiopian Birth Family Perspectives on Transnational Adoption” employs a reproductive justice lens to interrogate the construction of motherhood, reproductive hierarchies of adoption, and power imbalances between transnational adoptive parents and birth parents from the Global South. She notes that the traditional western model of adoption, as codified in the Hague convention, includes the irrevocable termination of parental rights for birth parents, which is rooted in disrupting the ability of women of color to parent. Dr. Hewan Girma’s project will center the reproductive labor of women of color, as they are are often neglected, marginalized, and erased from the conversations surrounding adoption and will privilege the voices and perspectives of birth families.

Linda Arnold Carlisle Faculty Research Grants are awarded to UNCG faculty to support research or creative activity related to women’s, gender, and sexuality studies. All full-time faculty who have not received the Carlisle Grant within the past three years are eligible to apply. Grants are awarded based on the quality and completeness of the proposal, the significance of the project, its implication for WGSS, and the significance of the project to the applicant’s career and future plans.

Carlisle Faculty grants provide a stipend of $1,500 to support tenure-stream faculty research.  The funds should be used between July 1st and June 30th of the academic year of the award.  Typically each grant recipient gives a presentation of their research in the Spring of the award year.

2021-2022: Dr. Judith Leitch
Department of Social Work
“A Grounded TheoryStudy of the Perceptions and Experiences of Psychotherapy by Sexual and GenderMinority People in North Carolina”

2020-2021: Dr. Daniel Coleman
Assistant Professor of Women’s, Gender, and Sexuality Studies
“Trans Ecologies at the End of the Human”

2018-2019: Yarneccia D. Dyson
Assistant Professor of Social Work
“Herstory: The Use of Womanism as an Epistemological Lens to Explore Sexual Health Risks and Lived Experiences of Women of Color in College Aged 18- 29”

2010-2011: Lisa Levenstein
Department of History
“Don’t Agonize, Organize” Displaced Homemakers and the Decline of the Family Wage in the Postwar United States

2007-2008: Alexandra Schultheis Moore
Department of English
“The Songs and Sentences of the Drapchi 14”

2006-2007: Jennifer Keith
Department of Music
“The Poems of Anne Finch: A Critical Edition”

2000-2001: Lucinda Kaukas
Department of Housing and Interior Design
“Re-Placing Women in the History of Modern Architecture and Design”

1997: Dr. Jude Rathburn
Bryan School of Business
“Women Working Together as Friends and Collaborators: Building a Community of Scholars”